In March of 2015, San Jose First United Methodist Church sent four members on a mission trip to the town of El Maguey in the state of Jalisco in Mexico. El Maguey is a little town that was created 13 years ago when a nearby city of Atotonilco el Alto attempted to move its residents with economic struggles away from the city. Today, an average family in El Maguey makes $300 per month, while an average family income in Mexico is $600 per month.

Gerardo Vazquez, the minister of Spanish language ministry at SJFUMC, has a house in El Maguey. Eight years ago Gerardo started a church in the garage of his house. He named the church Christo Vive, emphasizing the fact that Christ lives. The church has grown over the years, and now it sponsors various service programs and holds three services a week.

The purpose of the mission trip in 2015 was to strengthen Christo Vive’s worship services, and also to start an ESL program that allows San Jose First to continue to teach English via Skype to children in El Maguey. It is a known fact that those with English proficiency in El Maguey and its surrounding cities are able to receive higher paying jobs.

As a result of the team’s visit, two remarkable changes have emerged: Christo Vive’s worship experience has been completely revamped; and since the start of the ESL program, several children in El Maguey have greatly improved their ability to speak and understand English. 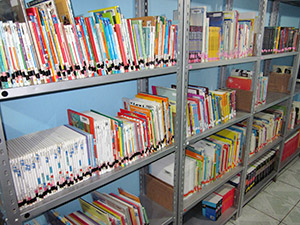 In June of 2017, we returned to Mexico and visited Christo Vive to help them create the first library in El Maguey. San Jose First UMC was the recipient of the collection of library books from Grant Elementary School when they updated their library. The books were organized and labeled by language (English or Spanish), subject, and reading level. We shipped the books to El Maguey, and in July, a group of volunteers from our church went to El Maguey to set up the library – the first one in the town. The library is open to everyone in El Maguey.

In 2019, we returned to El Maguey for the third time to make some enhancements to the library and to upgrade the technology for Cristo Vive and the ESL class. For the library, we purchased 221 English and Spanish language books and assembled two new shelves to accommodate the new books. The English language class received new electronics, which we purchased, installed and configured, including: a flat panel TV to display video conferences and lessons for the class, a fast laptop and printer, a webcam for higher quality sound and pictures, upgraded internet service and a WiFi router for more reliable, faster network connections. Most of all, we enjoyed building the relationships with students and Cristo Vive that we formed in the previous trips. 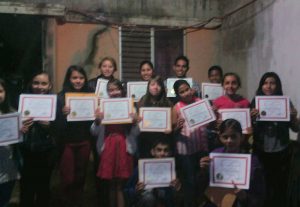 Looking ahead to the future, our goals are to establish a community center with a bigger library, worship area, classrooms and sports facilities. We also hope to build on the success of our children’s ESL class by establishing an adult English class and expanding the number of students. We also hope to create closer ties with the Cristo Vive church and San Jose First.

Photos from the 2015 Mexico Mission Trip:

Photos from the 2017 Mexico Mission Trip:

Photos from the 2019 Mexico Mission Trip:

Due to Covid-19, volunteering is on hold for now.

Normally, volunteers are always needed for one-time events or on-going programs. If you can help someone with homework, develop job skills, make household repairs, prepare meals, partner with seniors or minister to those in extended care facilities, or lead a discussion group, we have an opportunity for you. Our volunteer ministry is all about allowing people to serve Christ through sharing their special gifts with others.

If you are interested in volunteering in any capacity, please contact the church office. Training, information, and a team to work with are available. 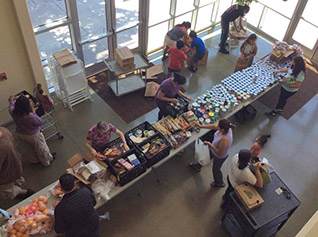 Sunday services are happening online via Zoom every Sunday at 10:00am. To receive the Zoom link and passcode, email us or join our email list.

Visit our blog here to read notes from the pastors.

To receive communications from us, please join our email list.

Our Work in Mexico

San Jose First has a special connection to the Christo Vive church in El Maguey, Mexico. We’ve helped them start an ESL program for children and a community library. Learn more >